Tower of the sun

Standing 70 meters tall, the Tower of the Sun is a massive piece of art designed by the artist Taro Okamoto as part of the Theme Pavilion for the 1970 Japan World Exposition.

It left quite an impression on the many visitors (around 9.2 million people) to the Theme Pavilion during the Expo, penetrating the Grand Roof and soaring upward, its arms stretching in both directions.

The Tower of the Sun has three faces, the glimmering Future represented at the apex of the tower by the Golden Mask, the Present in the form of the Face of the Sun in its front, and on its back, the Black Sun of everything Past.

In its interior is the Tree of Life, approximately 41 meters tall, presenting the course of the evolution of life through 33 varieties of 183 models, from the earliest life forms like the amoeba, to fish and dinosaurs, and finally forms of man.

The Tower of the Sun shows the core of Life, and the core of Celebration, while simultaneously standing for the Energy of everything created, piercing through the past, present, and future.

After the Exposition, all of the internals of the Tower of the Sun were closed to the public, but in March of 2018, they were resurrected and reborn, opening to the public once more.

Nearly half a century later, the Tower of the Sun has become the symbol of Osaka and the Expo’70 Commemorative Park..

There are 3 faces on the Tower of the Sun: the Golden Mask, the Face of the Sun, and the Black Sun. At the time of the Japan World Exposition, there was a Subterranean Level Exhibition in the Theme Pavilion. One section of this space was called <PRAYER>. It was in this space, a so-called 4th face was exhibited. 3 meters tall and 11 meters wide was the Sun of the Underworld, expressing the inner spiritual world of humans.

When the Exposition ended, it disappeared without a trace. A reconstruction was created and in March of 2018 it went on display to the public. 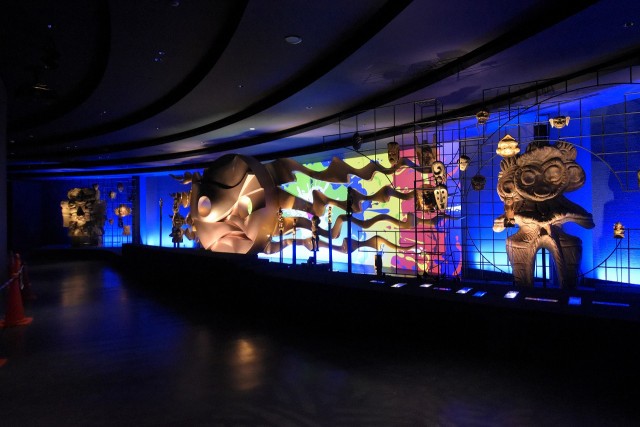